Mitochondrial DNA (mtDNA) depletion syndrome comprises a group of diseases caused by a deficiency of proteins involved in mtDNA synthesis, leading to quantitative (mtDNA depletion) and qualitative (multiple mtDNA deletions) defects in mtDNA.1 The diseases are classified based on the organs predominantly affected, such as encephalohepatopathy, encephalomyopathy, encephaloneuropathy, neurogastrointestinal encephalopathy, myopathy, ophthalmoplegia, optic atrophy, and neuropathy.2 is located on chromosome 2p23-21 and contains eight exons. is an mtDNA maintenance protein whose role remains to be elucidated. -deficient mice exhibit an insufficiency of mitochondrial deoxynucleotides, especially in the liver.3 -related hepatocerebral mtDNA depletion syndrome (also called an -related mitochondrial DNA maintenance defect) was first reported in 2006 and is an autosomal recessive disease characterized by encephalohepatopathy.4 Until 2018, approximately 100 individuals had been diagnosed with -related hepatocerebral mtDNA depletion syndrome. Most were described as an early-onset hepatocerebral disease. Late-onset neuromyopathic disease associated with multiple mtDNA deletions in muscles has rarely been described.5 This case report describes the clinical manifestations of -related hepatocerebral mtDNA depletion syndrome in a Korean child by whole-exome sequencing (WES).

A 17-month-old Korean girl was admitted to Seoul National University Children Hospital to understand her developmental delay and failure to thrive. She was born as a dichorionic diamniotic twin infant to nonconsanguineous parents at 37+1 weeks of gestation with a birth weight of 2.04 kg (<3rd percentile), height of 45.6 cm (50th percentile), and head circumference of 32.0 cm (50th percentile). Immediately after birth, she was admitted to a nursery for routine neonatal care. The liver function (AST, ALT, total bilirubin) and newborn screening test results were normal. 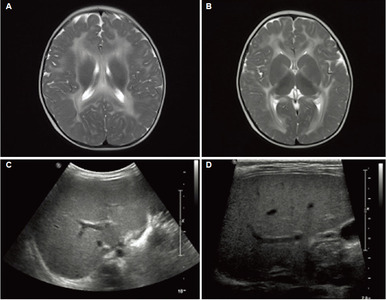 She was infected with adenovirus that manifested as diarrhea, vomiting, fever, and poor oral intake. She visited an emergency room because of a seizure. Her initial blood sugar level was 11 mg/dL; thus, she was fed uncooked cornstarch.

Although the patient exhibited developmental delay, she underwent physical therapy for eight months and showed improvement in development. Her gross motor function measure score was 86.9%, but her liver function tests were aggravated. Despite the administration of vitamin K, her serum total bilirubin level was 2.6 mg/dL (direct bilirubin level 2.27 mg/dL) and PT INR was 3.21. Subsequently, she manifested with liver failure and mild neurological symptoms and is being considered for deceased donor liver transplantation. The Institutional Review Board of Seoul National University Hospital approved this study (Approval No. 1807-137-961).

The potential of WES was introduced in 2009,8,9 and has since been improved. WES is a cost-effective and useful genetic diagnostic tool.10,11 In addition to , mutations in DGUOK, POLG, TFAM, and TWNK cause hepatocerebral mtDNA depletion syndrome.1 WES allows researchers to perform multiple genetic analyses for hepatocerebral mtDNA depletion syndrome. In particular, when the patient’s phenotype is analyzed, it is important to consider other congenital disorders, such as mitochondrial disease or disorder of glycosylation, in addition to mitochondrial DNA depletion syndrome. Compared to other molecular genetic tests, WES has strength in effectiveness when multiple genetic diseases are considered in a differential diagnosis. Thus, WES was performed to confirm the compound heterozygous mutations in . Hence, diagnostic examinations, such as liver biopsy and other genetic studies, were not necessary. WES can provide information on the prognosis, genetic counseling, and prenatal diagnosis.

To date, 48 mutations have been reported. p.Gln93Pro is the most common homozygous pathogenic variant found in multiple Arab families.5 p.Leu151fs and p.Pro98Leu variants have also been detected in other cases. A recent study revealed the presence of p.Leu151fs in eight out of 13 Japanese patients (61.5%) with -related hepatocerebral mitochondrial DNA depletion syndrome.12 Thus far, 13 cases of p.Pro98Leu have been reported, among which seven patients (53.8%) were Asian.5,12

Genotype-phenotype correlations caused by gene mutations are unclear. On the other hand, a trend of survival was observed depending on the variant type. Mortality is slightly lower in biallelic missense pathogenic variants than biallelic null (nonsense, frameshift, deletions, and slice-site) variants. Furthermore, individuals homozygous for p.Arg50Gln, p.Pro98Leu, or p.Arg41Gln may have a better prognosis.5

The outcome of liver transplantation (LT) in patients with -related hepatocerebral mtDNA depletion syndrome remains unclear because of its extrahepatic manifestations and poor outcomes during the post-transplantation period. The causes of death after LT are sepsis, respiratory failure, or multiorgan failure. Moreover, several patients developed pulmonary hypertension after LT.12 Nine out of 20 patients (45%) survived after LT.5,12,14 On the other hand, a case with the same mutation as the present patient (p.Leu151fs and p.Pro98Leu) showed a good prognosis with survival for more than 20 years after LT, even though the patient experienced neurological deterioration.12 Collectively, patients harboring p.Pro98Leu or p.Pro98Leu in at least one allele without marked neurological manifestations might have a better prognosis after LT.12 The patient with mild neurological manifestations is being considered for a deceased donor LT owing to liver failure.

In conclusion, this paper reported the clinical manifestations of -related hepatocerebral mitochondrial DNA depletion syndrome in a Korean girl. WES can be useful in diagnosing patients with hepatopathy, developmental delay, lactic acidosis, and hypomyelination on brain MRI.