Abstract
Acute eosinophilic appendicitis (AEA) is defined as eosinophilic infiltration of the muscular layer of the appendix instead of neutrophils. The symptoms of this disease are similar to those of acute suppurative appendicitis. On the other hand, it can present as a lower gastrointestinal hemorrhage. This paper reports a case of an elderly man with an appendiceal hemorrhage due to AEA. The diagnosis was made by colonoscopy during an evaluation of hematochezia. The patient underwent a laparoscopic partial cecectomy. The histology findings revealed ulceration and marked eosinophilic infiltration of the muscularis propria of the appendix with accompanying edema. Although appendiceal hemorrhage due to AEA is extremely rare, clinicians should consider it in a differential diagnosis.
Keywords: Appendicitis; Eosinophils; Gastrointestinal hemorrhage

The Institutional Review Board of Wonkwang University Hospital (IRB No. WKUH 2021-03-014) approved this study, and informed consent was waived. 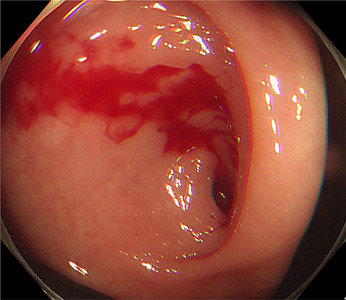 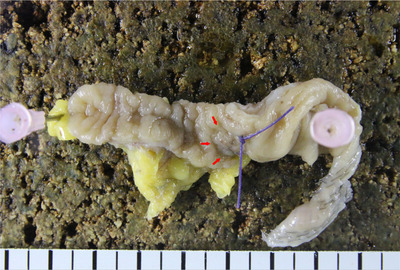 Figure 3. Histological findings of (A) central ulcerative lesion (red arrows) (H&E, ×40). (B) Marked eosinophilic infiltration in the muscular layer in the appendix and accompanying edema (H&E, ×100).

Aravindan12 suggested that eosinophilic infiltration in the muscularis propria of the appendix was an early event of appendicitis- related type I hypersensitivity to allergens. He further explained that a local allergic reaction could cause edema, and the appendix is vulnerable to ischemia because of its small size, which results in mucosal damage. Neutrophilic infiltration and acute suppurative appendicitis occur if the damaged mucosa is infected with microorganisms.1,12 In a follow-up study in 2010, Aravindan et al.1 used the term “acute eosinophilic appendicitis” to describe this disease entity. They suggested it as a variant of acute appendicitis. The histological feature of AEA is the infiltration of eosinophils in the muscularis propria of the appendix instead of neutrophils and accompanying edema lesions.1 This hypothesis is novel but requires further studies.

In the present case, marked eosinophilic infiltration was observed in the muscular layer of the appendix, which is consistent with AEA. No other causes of tissue eosinophilia, such as a parasitic infection, were found. The patient had no history of atopy or peripheral blood eosinophilia. The histological findings confirmed the ulcer, which was believed to result from the mucosal damage caused by AEA. The ulcer was the presumed cause of this hemorrhage. Because the damaged mucosa had not yet been infected with microorganisms, LGIH presented as the first symptom instead of typical right lower quadrant pain and fever seen with acute suppurative appendicitis. The patient has taken clopidogrel because of cerebral infarction. Only a few cases of appendiceal bleeding have been reported in patients using aspirin, NSAIDs, or ticlopidine. Because of the small number of cases, it is difficult to clarify the association between a specific drug and appendiceal bleeding.2

Various modalities, such as mesenteric arterial angiography, colonoscopy, and multidetector CT (MDCT), are used to diagnose appendiceal hemorrhage. Colonoscopy is a well-established and safe method for diagnosing LGIH. On the other hand, appendiceal hemorrhage may be close to the ileocecal valve, making it difficult to distinguish it from a small bowel hemorrhage. Moreover, in emergency settings, the approach itself may be complex because of the presence of fecal material from the lack of bowel preparation. In these cases, a combination of colonoscopy and MDCT can improve diagnostic accuracy. In addition, MDCT can help identify the underlying cause of appendiceal hemorrhages, such as appendicitis or tumor.2,3,13,14

An appendiceal hemorrhage is treated mainly by surgery, including appendectomy, cecectomy, ileocecectomy, and right hemicolectomy.2,13 Almost all were treated surgically except for two previously reported cases. One of them was treated successfully with endoscopic hemostasis for angiodysplasia, which was confirmed by the absence of other lesions in the appendix. The other was treated with percutaneous transcatheter arterial embolism. Eventually, this patient required surgery because of rebleeding. In many previously reported cases, treatments with endoscopic and embolization approaches were difficult because appendicitis was the cause, or a tumor was present.14,15 Thus, the surgical option appears to be the most feasible method for diagnosing and treating appendiceal hemorrhage.